His Majesty's New World 2 of 6

The second novel of adventure set upon His Majesty’s New World… The Royal Newfoundland Regiment is sent to the American Pacifica Territory to assist with a new mission on the grasslands. Partnered with the buffalo soldiers of the 25th United States Infantry Regiment, Waller, Smith, Emily, Caralynne and the b’ys must march out onto the new world ‘Frontier’. But the American lands are lawless and full of unexpected foes, and the blue enemy has learned from the Newfoundlanders’ previous mission. New challenges await on the Frontier…

Jimmy Devlin was up at the crack of dawn – slightly before it, in fact – and heading for the top deck of the Florizel as it paddled down the river. He was to take over the watch for the morning, serving as the officer present with the ready section in case there was some sort of complication.

It was well known on the new world that savages didn’t like the water… or so the Newfoundlanders had been told. However, further inquiries revealed that there was no proof of the fact. It was just an observation – no one had ever seen savages swimming. To Waller and the rest of the Newfoundlanders, that lack of evidence left suspicions. No one left living had seen savages in the water, but it seemed possible that the beasts could swim. After all, they had all the right parts to make it work.

Keeping that in mind, the decision had been taken to keep a section on the top deck of each riverboat, ready at all times in case trouble appeared. Now it was Jimmy’s turn to command that overwatch.

Pulling on his hat as he arrived in the cool, pre-dawn air, Devlin looked to port and to starboard, his eyes slowly adjusting to the growing light. Nothing immediately caught his attention, so he crossed the top deck just as Sergeant Halloran led his section up behind him.

Lieutenant Kennedy, who’d had the night watch with one of the sections from his platoon, saw Devlin coming, and turned to his fellow junior officer, “Morning, Jimmy.”

A tired grin formed on Kennedy’s face, and he nodded, “Just the way I like it, sure enough. We’re well out onto the grasslands now, though, eh?”

Looking to the banks of the river again, Devlin nodded. The last time they’d been this far from civilization, they’d been on a train that had been doing thirty miles an hour… here they were doing ten knots, and the grasslands were passing by more slowly.

“Well, at least we have some water between us and any trouble,” Kennedy continued. “If I can’t swim, I sure hope the savages can’t.”

Devlin glanced back at his compatriot, “You can’t swim, b’y?”

“No,” Kennedy shook his head, then turned his grin back towards Devlin. “You saying you can?”

Chuckling, Devlin shook his head, “Was out with pop for four years on the schooner, b’y, and never thought it’d be good luck.”

“Exactly,” Kennedy agreed, then pulled his hat from his head and let the wind rustle his hair. He was about to speak again, but the sound of a rifleshot interrupted him.

Smiles disappeared instantly, and the men of the two sections on the top deck of Florizel – Kennedy’s original section, and Halloran’s which had come up to replace it – had their rifles instantly in hand and were looking all around.

Devlin hastily drew his revolver and cast his glance backward, towards Dinah, the second riverboat under the charge of the Newfoundlanders. On its top deck, he could see Lieutenant Conway was similarly confused.

“It’s the Yanks!” Kennedy was looking forward, to the American-carrying paddleboats Emerald and Kansas City, and on the top deck of the latter he could see a section of men from the 25th working their rifles with quick and cool efficiency.

“What the bejesus are they shooting at?” Jimmy asked sharply, holding up his hand to Conway and pointing forward, to indicate where the action was.

“Savages off to port, on the bank there!” one of Halloran’s men had sharp eyes, and saw the creatures first. Devlin straightened from the crouch he’d settled into and looked ahead and to the left… he didn’t see a horde…

“Christ, there’s only a few dozen of them,” Kennedy saw them first, and then as Devlin set eyes on the party, he scowled. A few dozen savages who’d been sitting in the grass, probably waking themselves up for a day’s running… and the Americans were letting them have it.

Well, they were savages.

Turning to Halloran and Sergeant Whealan, who led Kennedy’s section, Jimmy nodded towards the bank, “The Yanks are killing them. We should probably lend a hand.”

Halloran didn’t reply directly – instead he ordered his men to the deck rail and called for rapid fire. The b’ys hadn’t done much shooting with their Short, Magazine, Lee-Enfield rifles since they’d come in off the grasslands, and it took them a couple of rounds each to settle in. Then their .303 bullets started telling.

The savages were right on the bank of the river, but at this point the river was quite wide, so the range was probably 100 yards. Nevertheless, the results were telling.

As Kennedy’s section joined the firing line, the savages started to try to scatter, like tired and surprised animals under attack. Seemed unlikely they were under the direct control of a blue man, just then – they were by no means appearing organized.

Just as Devlin was making that observation, two things happened: Waller bounded up onto the top deck of Florizel, buttoning up his jacket with one hand, holding his revolver in the other; and Kennedy tugged at Devlin’s sleeve.

“Look!” the Lieutenant said, pointing towards Kansas City, and Devlin did… in time to see Major Krazakowski holding up an absurdly large sign that read ‘PLEASE CEASE FIRE’.

Wondering if they’d made some sort of mistake, Devlin bellowed the command to the two sections on the top deck, and those twenty-four rifles fell silent.

The cracks of the American 1903 Springfield rifles continued.

Waller arrived next to Devlin with a frown, his eyes immediately moving to the port side. He spotted the savages – a handful of them still standing – and then glanced at his Lieutenant, “Why’d we stop firing, Jimmy?”

Devlin answered by pointing at the riverboat ahead, and the sign being wielded by the American Major on its top deck, “Orders from the cousins.”

“S’pose… they wanted the target practice for themselves, sir,” Kennedy offered his assessment, and Waller frowned. Krazakowski hadn’t seemed the sort to put practice ahead of practicality… more rifles made faster work.

“Wonder where they got the sign,” Devlin added, and Waller glanced at him. That was a good question… and how did he write the message so quickly?

But that was quite irrelevant at the moment.

Waller pulled his hat off his head, “Well, that’s one way to start the day. Kennedy, you and your b’ys get some rest. Jimmy, I’ll stick around with you for a while, see if there’s any more messages from our friends and allies…”

His words trailed off as a woman’s hand suddenly grabbed one of the deck rail posts. Emily used that solid grip to pull herself up and over the rail, and she landed in a ladylike fashion, dusting off her hands and smiling, “Good morning, gentlemen.”

Waller, Devlin and Kennedy simply stared at her, and then the Major found his voice, “You could have used the stairs. You didn’t need to climb two decks.”

“I didn’t climb them,” Emily shook her head. “I jumped them… thought I could come straight up and get over the rail, but didn’t have enough room to get a running start.”

That shut the officers up quite effectively, but a couple of the men from Halloran’s section enjoyed a good laugh. Emily was, of course, formidably impressive.

Then Halloran noticed that savages had all been shot down, “The Yanks have finished them off, sir.”

Waller’s gaze hopped from Emily to the shore, and he nodded. No danger to the convoy, unless the savages had somehow warned the Martians that there were four boatloads of fighting men on the way. His eyes turned back to Kansas City, where Krazakowski was holding up a new sign.

“Don’t want them to count our guns,” Devlin repeated the message aloud, and Waller’s eyebrows lifted in surprise.

That point actually had some military sense: if the Martians could somehow sense everything the savages were seeing, then they’d know that four boats were coming, but not that all four of those boats were loaded with soldiers. Only two had opened fire on the savages… the other two could be supplies, or civilians under escort.

Krazakowski was being practical… in a way Waller wouldn’t have thought of. Perhaps that was a good sign.

Perhaps it was a fluke.

“Perhaps they are… right, Kennedy, off you go. Emily, will you be gracing us with your company?” Waller turned to her with those words, and Emily curtsied.

“Of course, Tom. This trip would be dull if I didn’t get to abuse you and Jimmy.”

“Shit, b’ys, we’re some lucky to have her around,” Devlin groaned, looking back towards Halloran’s section.

The men laughed, and the Newfoundlanders prepared for another long, hopefully uneventful day on the river.

Buy on KoboBuy on iBookstore 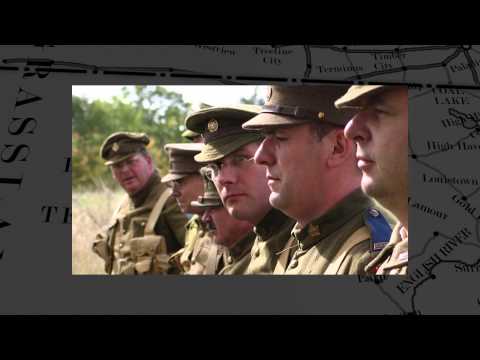