The Equations Novels 6 of 8

The galaxy reels from the shocking return of Omega. Genesis is gone, the haggard remnants of its human civilization barely escaping infection and slavery at the hands of the mutated, sentient plague. Freetown, Gibraltar, New Halifax, Krogg ‘A’, and Earth must now desperately prepare to defend themselves, while Elandra Caine seeks a cure. The key to that cure might be aboard ENS Renown, but that vessel is trapped outside the Earth Galaxy, and is being chased by Omega’s ships. Newly-appointed Supreme Consul Setter Caine finds the situation grim. Omega is the supposed ‘God’ of the Earthers, and by studying the Krogg War, he has learned much about the way his creations make war. He intends to use this knowledge to gain his revenge…

Admiral (retired and now recalled) Jax Furgus was walking quickly through the corridors of his recommissioned flagship. Aboukir, in company with seven other 74-gun ships of the line and a squadron of 44-gun frigates, made up the sum total of the Earther Navy’s presence in Freetown space.

And as far as Jax was concerned, that wasn’t quite enough.

Like all Earthers, he’d seen Omega’s message, and with that sort of nasty megalomaniac of a plague marking the Earthers and humans for annihilation, he wouldn’t even begin to feel comfortable until the Earther Navy was properly up to strength again. Decades of peace had left the fleet much smaller than it had been during the Krogg War, even if it was much more advanced. The reduced size meant the Admiralty simply didn’t have the ships to fortify Earth, Freetown, New Halifax, Gibraltar and Krogg, not until the veterans vessels of the Krogg War were unpacked from their storage crates and rebuilt.

Of course, recommissioning those thousand Krogg War veteran ships would take time, and if Omega was as smart as he was claiming, he’d be moving fast to avoid having to deal with Earther Naval might.

Jax had actually been waiting for some sort of horrid plague fleet to turn up in Freetown space for days – Sarah Manchester’s refugee fleet had abandoned the Genesis system a week ago, giving Omega plenty of time to move.

Now, at last, Sarah and her Genesis Fleet were cruising into Freetown space, and as yet there was no indication that Omega was anywhere nearby. He might be following the refugee convoy… he might be only a day or two away… he might be lurking on the periphery of the system, waiting for a chance… he might be going somewhere else entirely…

Might might might… Jax was impatient with himself and his inner doubts. First time in your career you’re spooked, and that’s after having six ships shot out from under you, retirement, and fighting a new Church Faithful.

That, of course, and losing his daughter.

Earthers had a way of ignoring losses like those while duty required their attention, but this was a new sort of loss for Jax. This was his daughter, his beloved cub. He didn’t want to think about Joyce, who’d been a Captain of Marines with the Second Battalion, 54th Regiment (2/54th) serving aboard Renown at Genesis. Whenever he allowed himself to remember that she was dead, he wanted to stop, and to call his wife, and then to go find Omega and kill him for it. Revenge.

In other words, remembering her loss made him uncharacteristically emotional.

But as an Earther, Jax had the ability to retain control of his emotions, even at times like this. As much as he didn’t want it to be the case, he was the effective commander at this station… even if Audrey DeBrooke and whoever Sarah had with her happened to be officially senior in the human services.

Omega was an Earther bane, and thus the Earthers would lead the war against him. That plague might fancy himself their God, a creator with the ability to defeat the Earthers in open war, but as much as he’d witnessed (having watched the Krogg War from his hiding place in the blood of every Earther), he’d never seen them so committed to a cause as they were to his destruction. As far as Jax was concerned, Omega’s time in the universe was now quite limited: announcing himself had been a big mistake, because now the Earthers knew he existed, and would eliminate him.

That all being the case, Admiral Furgus, once Second Lord of the Admiralty, was ready to take command of the station at Freetown. While Admiralty House back on Earth scrambled to recommission ships, and decided where the new Venerables would go and under whose orders, Jax’s force would become the core of a defensive fleet that would keep Omega out of Freetown space.

Now the lion just needed to explain all that to his human counterparts. Because he hadn’t exactly let them in on it yet. That was what the coming meeting was for…

The decks he currently trod were winding towards Aboukir’s main briefing room, where Jax’s Flag Captain, the well-known Ronax Hobbes, waited with the commanders of the Freetown and Genesis Fleets. Pacing just behind Jax was Tom Locke, Commodore in charge of Jax’s frigates. A little further behind was Alix Tarkam, who’d bailed the Freetown Navy out of a tough spot in their last encounter with the Faithful Navy of Ecclesia.

Jax was going to have quite a few well-regarded Earthers on hand, just in case some of the humans wanted to argue and needed to be convinced that his planned course of action was the correct one. He could be very understanding of human feelings and doubts when he needed to be, but these weren’t usual circumstances… and his many years had probably dulled his tolerance. He was a crotchety old cat now, and he was bent on fighting.

The briefing room doors at last appeared in front of him, and slowing himself, Jax took a deep breath. He glanced back to Tarkam and Locke, “Set?”

Both Earthers nodded in turn, and Jax keyed the door and stepped into the room.

His eyes took in the situation immediately… no, actually, his ears caught it first… no, in fact, it was the anger that managed to pierce his instincts before any of the physical senses detected the strife.

“Gods damn you, this is our system – we just paid for it in blood! I’m not turning our fleet and our civilization over to you just because you let yours get out of hand!”

That was Audrey DeBrooke, and the sharp, desperate edge in her voice was as obvious when she yelled as it had been in her ordinary conversation during the past few days. Her husband, and co-founder of Freetown, had been killed by the luckiest shot in Church history – James Stanton had been lost with Archangel Sword’s bridge just before Tarkam could intervene in the Freetown-Faithful engagement.

Audrey had been coping on her own with that loss, and with the threat of Omega, for the past week. Every time Jax had spoken with her, he’d gotten the feeling she wouldn’t be pushed too far on matters of her colony and her fleet. He’d come today to convince her that she needed to integrate Freetown’s new and advanced warships with his, though by the sounds of it the Genesis officers in the room had started without him.

Jax’s eyes fell on the two other humans present. Both wore Genesis Fleet uniforms, but he recognized neither the man nor the woman. Probably young officers – not veterans of the Krogg War.

The man with them now bristled, “You have no concept of what we’ve gone through. If your ships hadn’t been out here causing trouble and forcing the Earthers to get involved, the Church never would have started the coup and we’d have been in place to stop Omega short of Genesis!”

Audrey’s eyes had been hard already, but they turned to steel at that accusation. She almost lunged across the table, but Ron Hobbes – who Jax now realized was standing next to her – had a strong hand on her shoulder.

“Maybe if you could’ve counted on the loyalty of your ships, you wouldn’t have been off station anyway. But I suppose your fleet’s unity was on the same level as its tactical skill. Took you plenty of time to get rid of the traitors, from what I hear!” Audrey lashed back.

The Genesis woman fielded that one, and although Jax heard the door open behind him, he found himself compelled to watch the young ArcLieutenant-General’s snarled reply, “I hear you divided your fleet in the face of an unknown enemy and got ambushed by the Church. You renegades don’t get to talk about skills after a screw up like that, especially now that you’re reliant on Earther technology to keep up with us–”

Jax was done with this garbage, “I think that’s quite enough!”

His roar caused the human heads to whip around, and his eyes narrowed as he looked at each of them in turn, “Now perhaps we can behave with some civility. I grant you we’ve all had a very bad week, and speaking as an Earther who just lost his daughter to a plague that’s been using my race as a Trojan horse for seven centuries, I’m in no mood for this sort of infighting. Were President Manchester here, I doubt she’d be impressed.”

“I might need Captain Tarkam to restrain someone if I hear another word, in fact.”

Jax’s ear twitched as he immediately recognized Sarah’s voice. He didn’t turn, but his eyes narrowed further, “Are we ready to talk then, ladies and gentlemen?”

There was silence for a moment, and Ron Hobbes was able to half-gesture, half-push the human fleet officers into chairs at the table. None looked too happy. Turning back to Sarah, Jax ground his jaw and bobbed his eyebrows, “Good to see you again, madam President. Just wish for better circumstances, of course.”

Sarah nodded slowly, “Just so. I think… we’ll have much work ahead of us.”

Jax’s head tilted a bit, “You could call it that… anyway, let’s sit.” 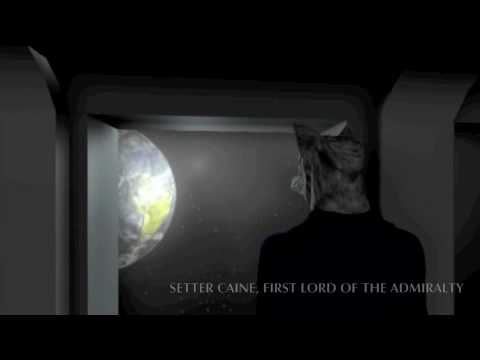